I may have mentioned a time or two that I was raised a Christian, Lutheran to be precise. My mother was a pillar of our local church. I may have even boasted of having served as the only atheist secretary of Illinois State Luther League. Not that I did anything noteworthy in that position – can’t remember doing anything at all, actually. But I was elected somehow. And being my mother’s daughter, how could I say no?

Throughout my childhood through my teenage years, going to church was a constant. Not only for me. For most of my contemporaries. It was the 50’s. We all went to church. Or synagogue – I knew two Jewish girls, but we never talked about any differences. As far as I knew, we all pretty much believed the same thing. There might have been a Catholic, but again I was never really aware of it. The rest of us who weren’t Lutheran were Presbyterian or Methodist. The folks we now call evangelicals we called Holy Rollers, but I didn’t know any of them, either.

In the middle of this time, there was a rite of the church through which all of us who attended the First Lutheran Church in Decatur, Illinois, had to pass. That rite was called Confirmation, wherein we were confirmed as true believers and were worthy of partaking in the Communion of Saints. We went to confirmation classes where we were instructed in the beliefs of our religion, most of which are laid out in the Apostles Creed:

I believe in God, the Father almighty, maker of heaven and earth.
I believe in Jesus Christ, His only son, our Lord, who was conceived by the Holy Spirit, born of the virgin Mary, suffered under Pontius Pilate, was crucified, died and was buried; He descended into hell; the third day He rose again from the dead; He ascended into heaven and sits at the right hand of God the Father Almighty; from thence He will come to judge the living and the dead.
I believe in the Holy Spirit, the holy Christian Church, the communion of saints, the forgiveness of sins, the resurrection of the body, and the life everlasting.

On a more useful note, one other thing was drummed into our dear little heads: the Books of the Bible. A list from which even to this day I can usually summon the correct answer to a crossword puzzle clue. 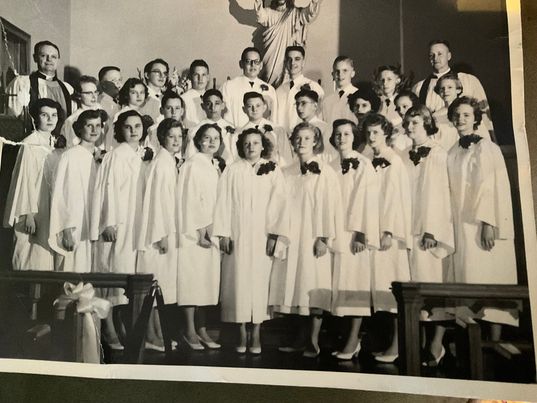 On the great day of Confirmation, we (see above) all sat together in the front pews and at the appointed time lined up at the rail to receive our first communion. But first, before we are given the holy wafer and a sip of wine, we must recite a Bible verse. I don’t remember what mine was, but then I knew at the time that I would not remember it, so I wrote it on a cheat sheet that I held cupped within my hands, folded as if in prayer.

Yes, my friends. I cheated my way into the Communion of Saints. Well, one does what one feels one must do.

I was nervous about being caught, and my mother said she saw me trembling a little. And then, before I could think of a good reason to be nervous that didn’t include fessing up about the cheat sheet, she said, “I thought perhaps you were having a religious experience.”

My poor, dear Mother. I never could bring myself to be entirely honest with her. But sometimes I have to wonder if she didn’t know everything all along. She did tell me one time that the only fear she had of dying was that she knew she would not see me in heaven. I had no answer for that, either. But to this day, non-believer that I am, when I picture my mother, I see her in a lovely Lutheran heaven. No one deserves it more.