A few years ago I hopped a tour bus in Rome for a day trip to Pompeii. I might have known I'd get lost.

I've made a sort of career of getting lost. Some of my earliest pseudo-memories - pseudo, because I don't actually remember them but my parents told the stories so often it seems I was actually there - are about finding Barbara, who had gotten lost. Department stores, parks, whatever. There was one about St. Augustine, FL - all I remember is wandering into a courtyard enticed by pretty red flowers, and then into an antique store where an old man (I was about 11, so draw your own conclusions) told me, for some reason, to never pretend to be something you're not, and I wish I could remember what story I told him to bring that on, but he has haunted my memory ever since.

He should have warned me about run-on sentences.

Anyway - I promised you Pompeii. 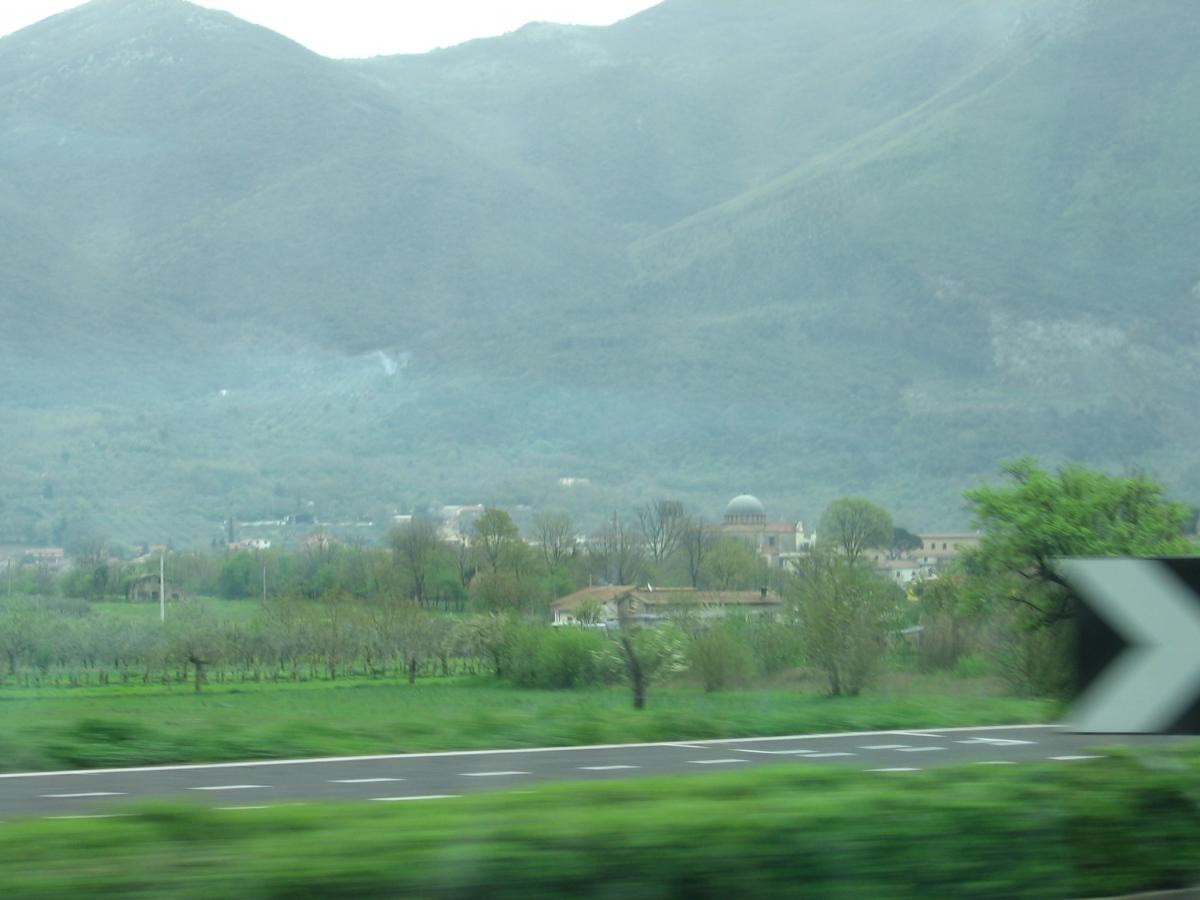 The highway runs between the Apennine Mountains and the Adriatic Sea, with glimpses of towns tucked into the foothills, old monasteries on the hilltops and umbrella pines sheltering the coast.

There was a quick stop to take in a bit of Naples - a few of us got off for the tour to the Isle of Capri - and a cameo factory (apparently we were all supposed to shop but I couldn't afford it). Somewhere along here it was pointed out to us that the mountain - well, being from Washington State I would have to say rather high hill - was, in fact, Mt. Vesuvius. 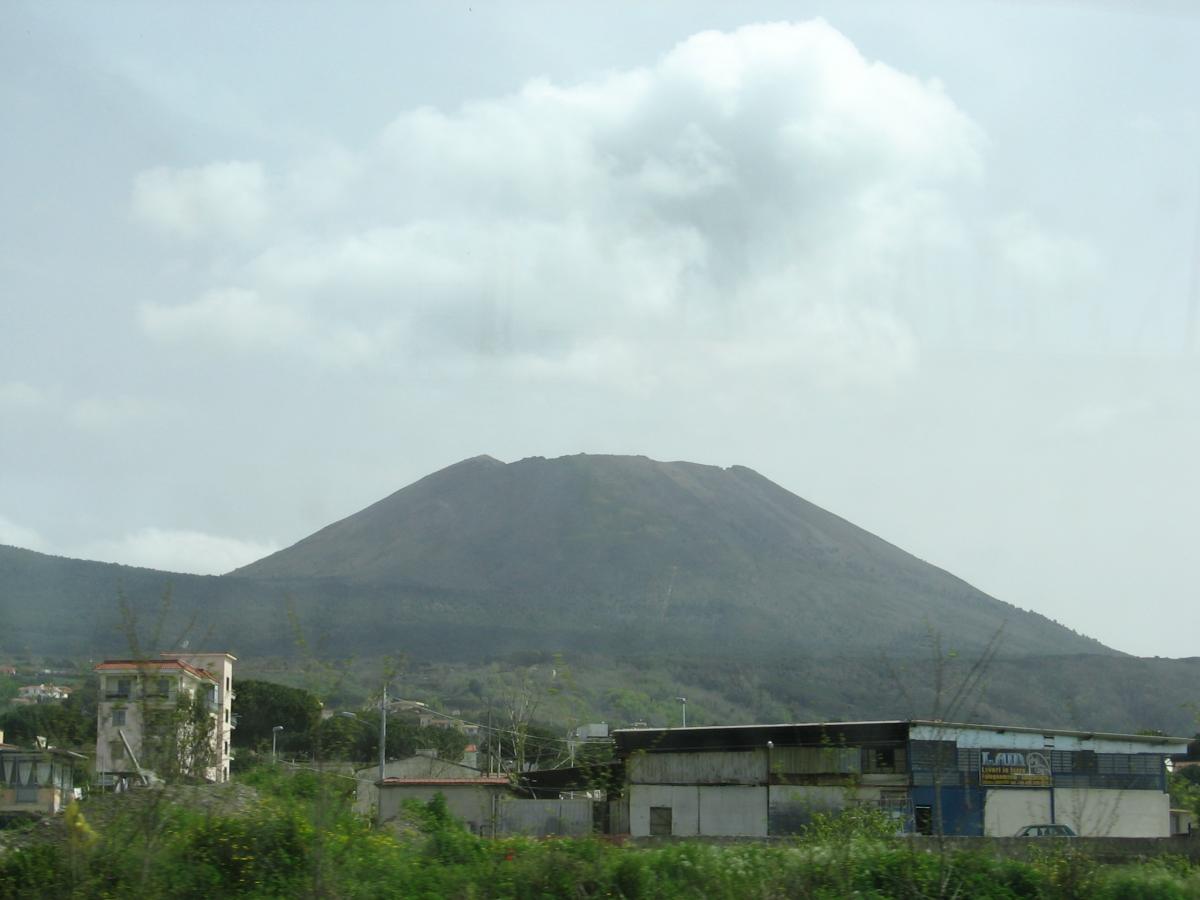 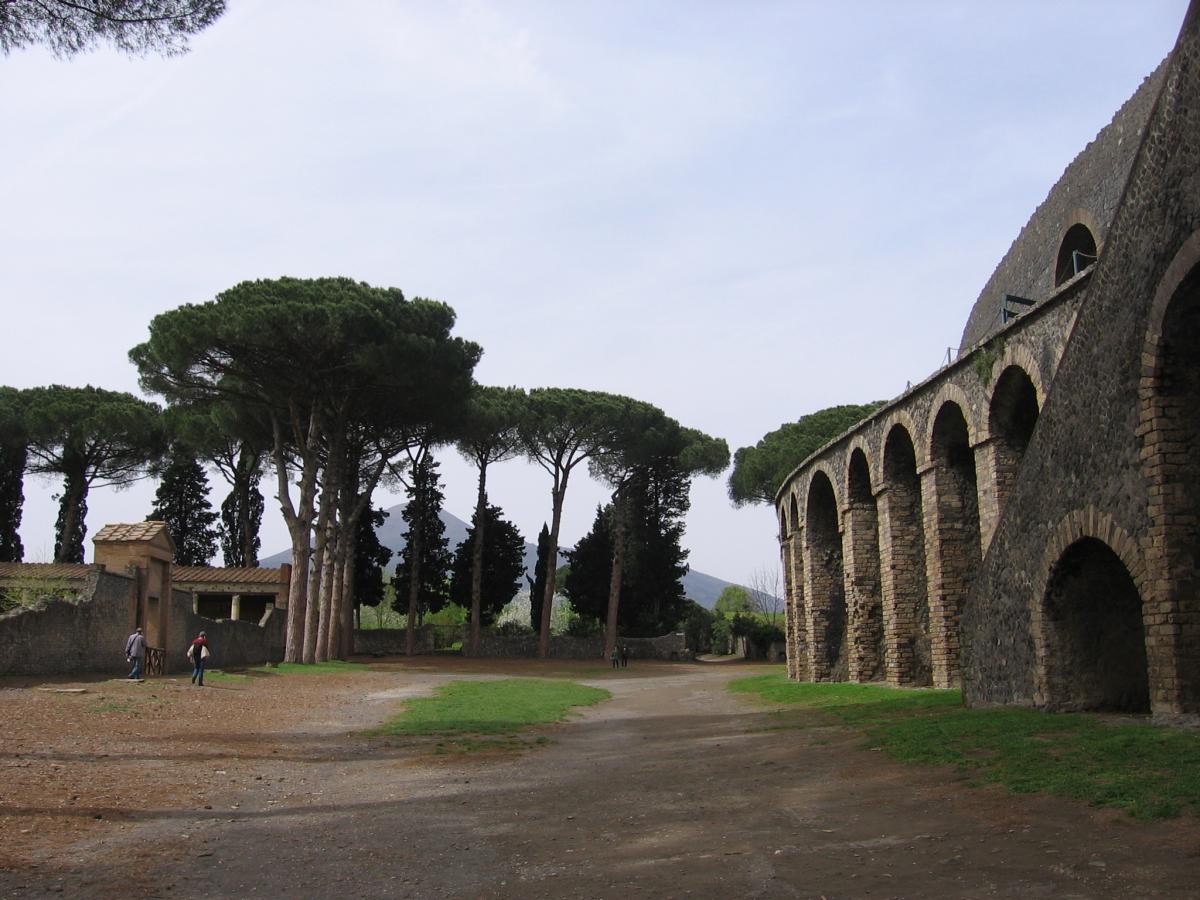 We met our tour guide, a stocky bushy guy straight out of Italian comic opera, (who was more interested in flirting with one of our fellow travelers - not me - than in keeping track of us all) at the Hotel Vittoria, . I had trouble understanding him, so as is my wont wherever I travel, I tagged along behind, missing most of the dialog but loving the sights. Even so, I made a point of staying with the group. We were to meet at a designated time back at the hotel, and I didn't know how to get back there. 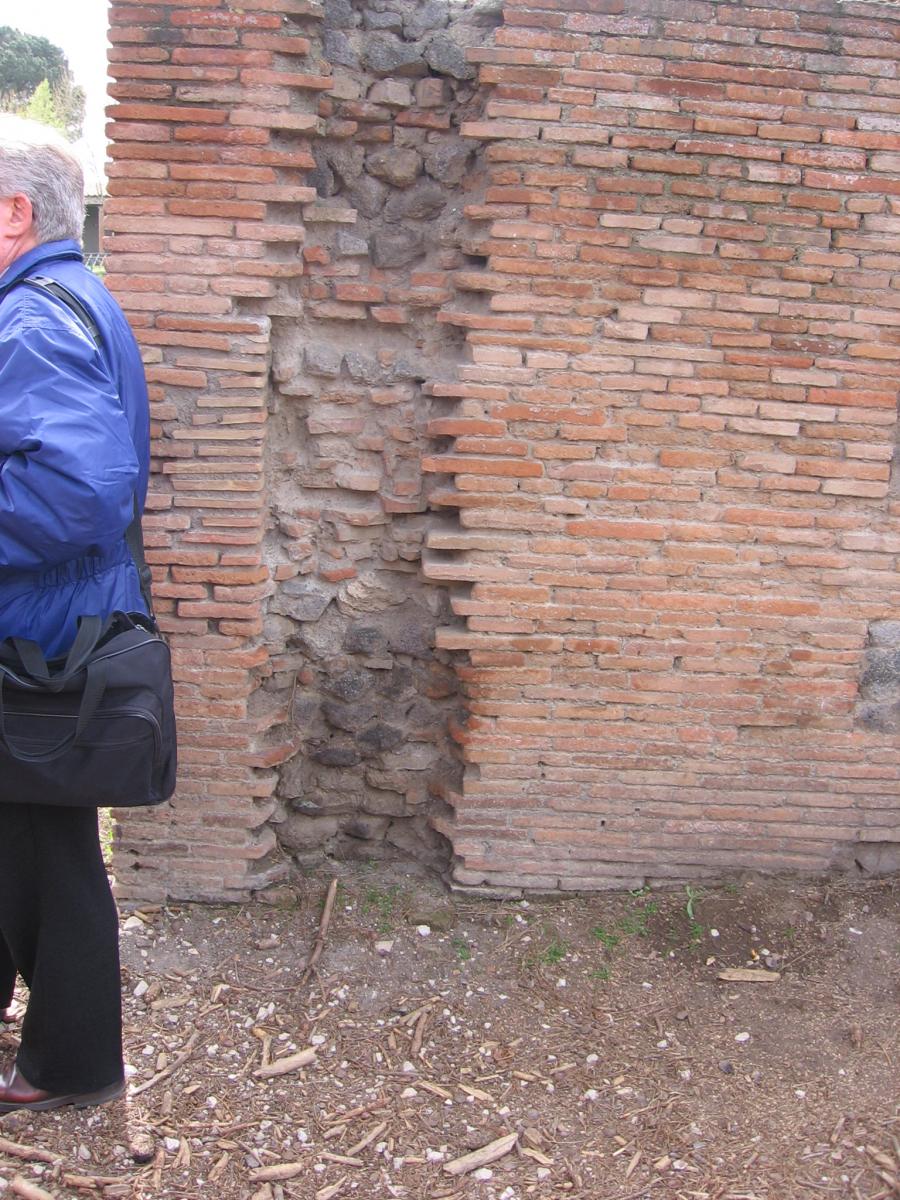 The ancient city itself is full of ghosts. In many ways, it reminded me of Troy, with its partially burned walls - I was close enough to our guide to hear that someone died at the spot where a char line streaks the brickwork. 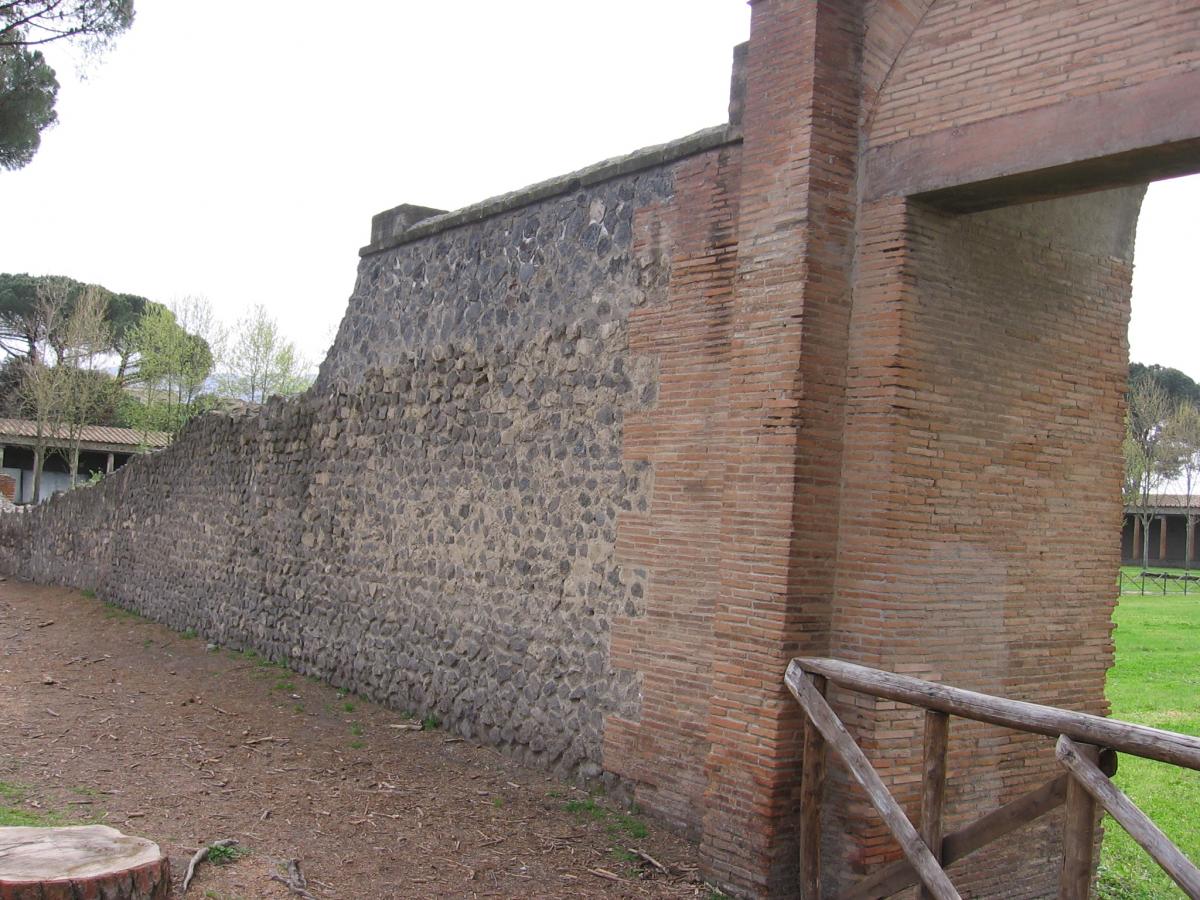 There's more evidence at Pompeii than at Troy of the people who lived here and the disaster that befell them. Stepping stones in the street leave room for donkey or horse-drawn vehicles to pass through while pedestrians can keep their feet out of the resulting muck. There are fast food joints, too, places where busy Pompeiians could grab a quick bite in between scrawling graffito on Pompeii's walls with both positive and negative political campaign ads. 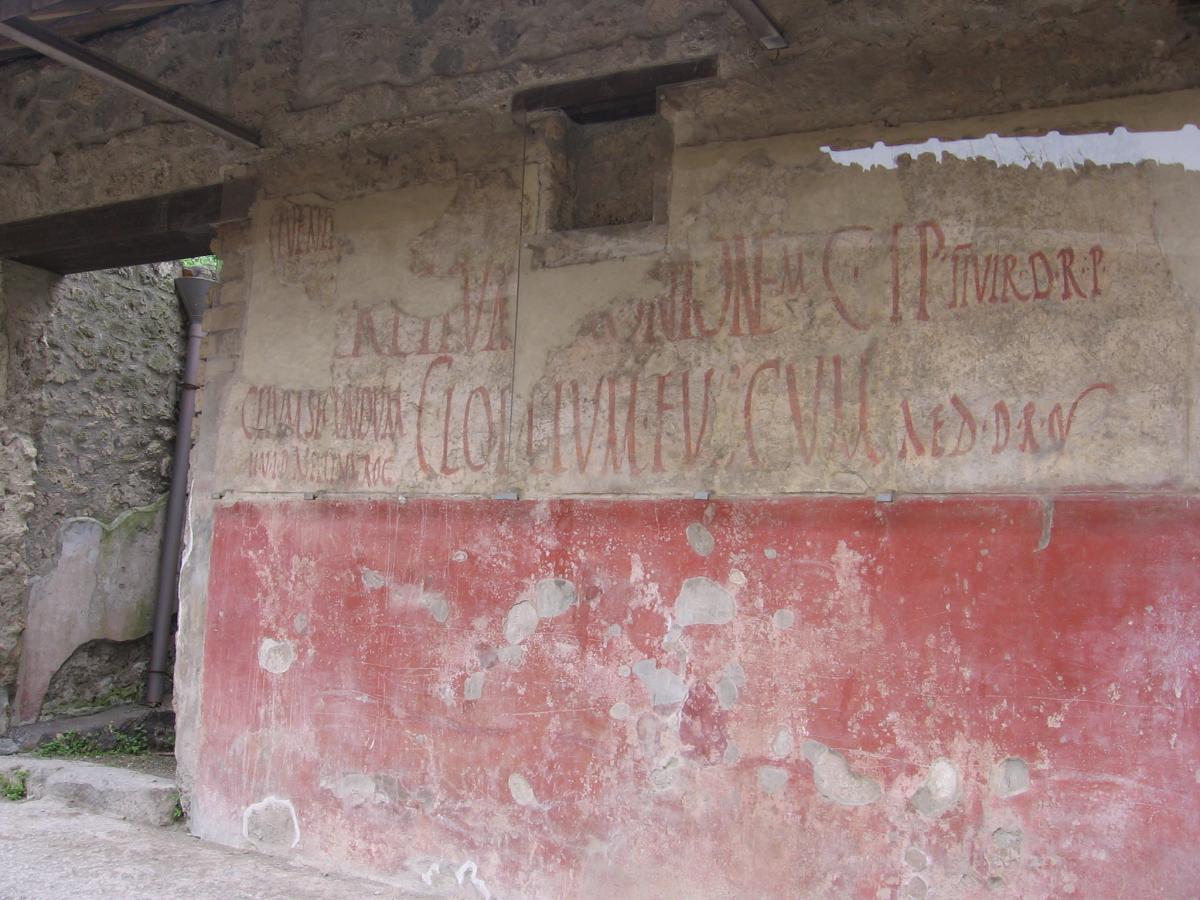 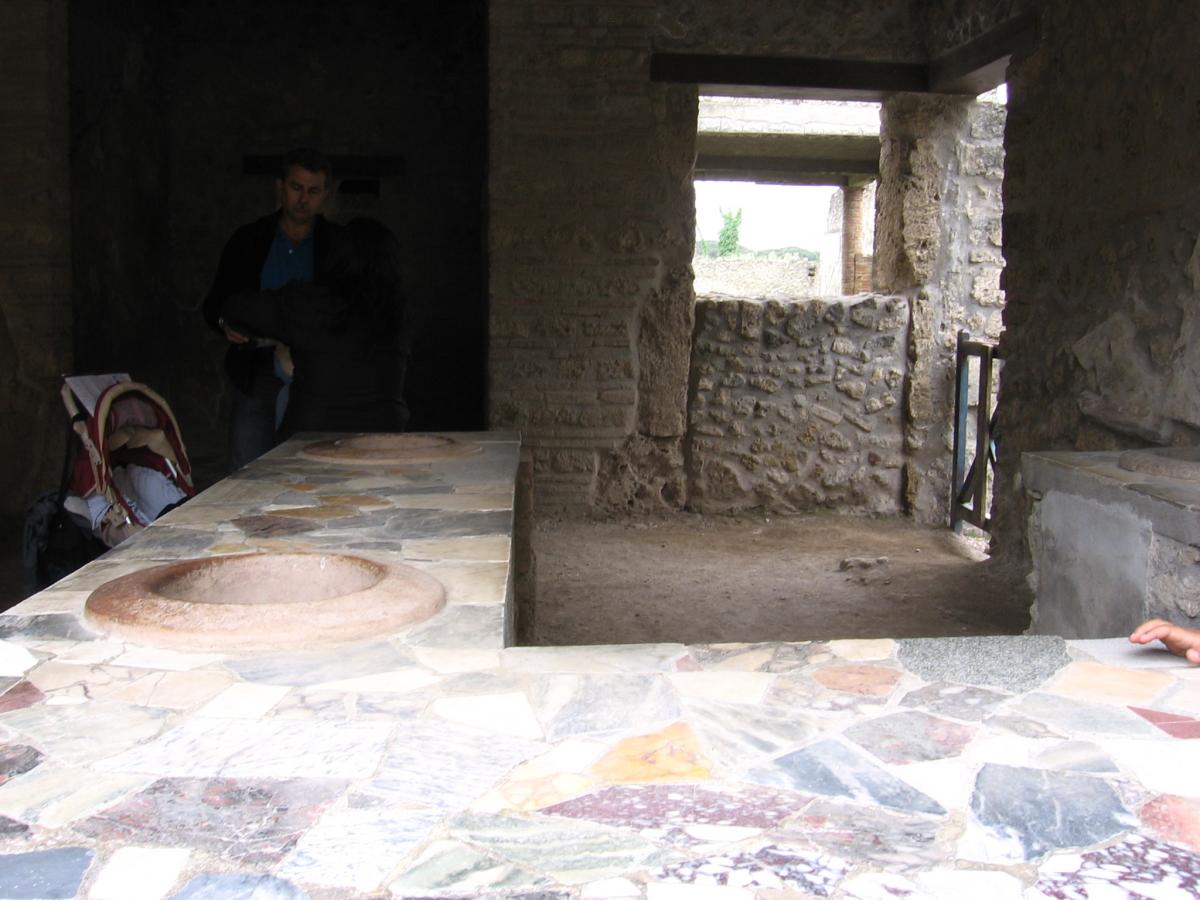 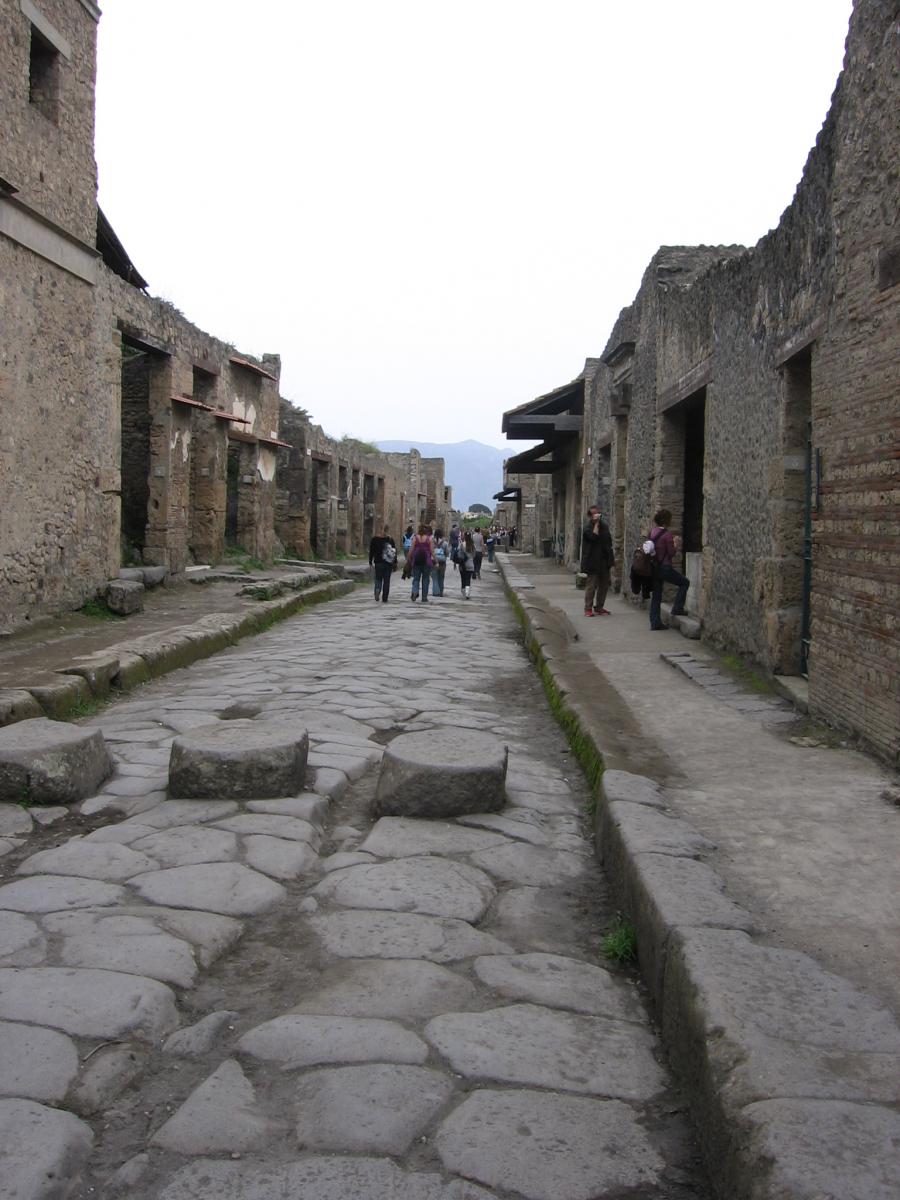 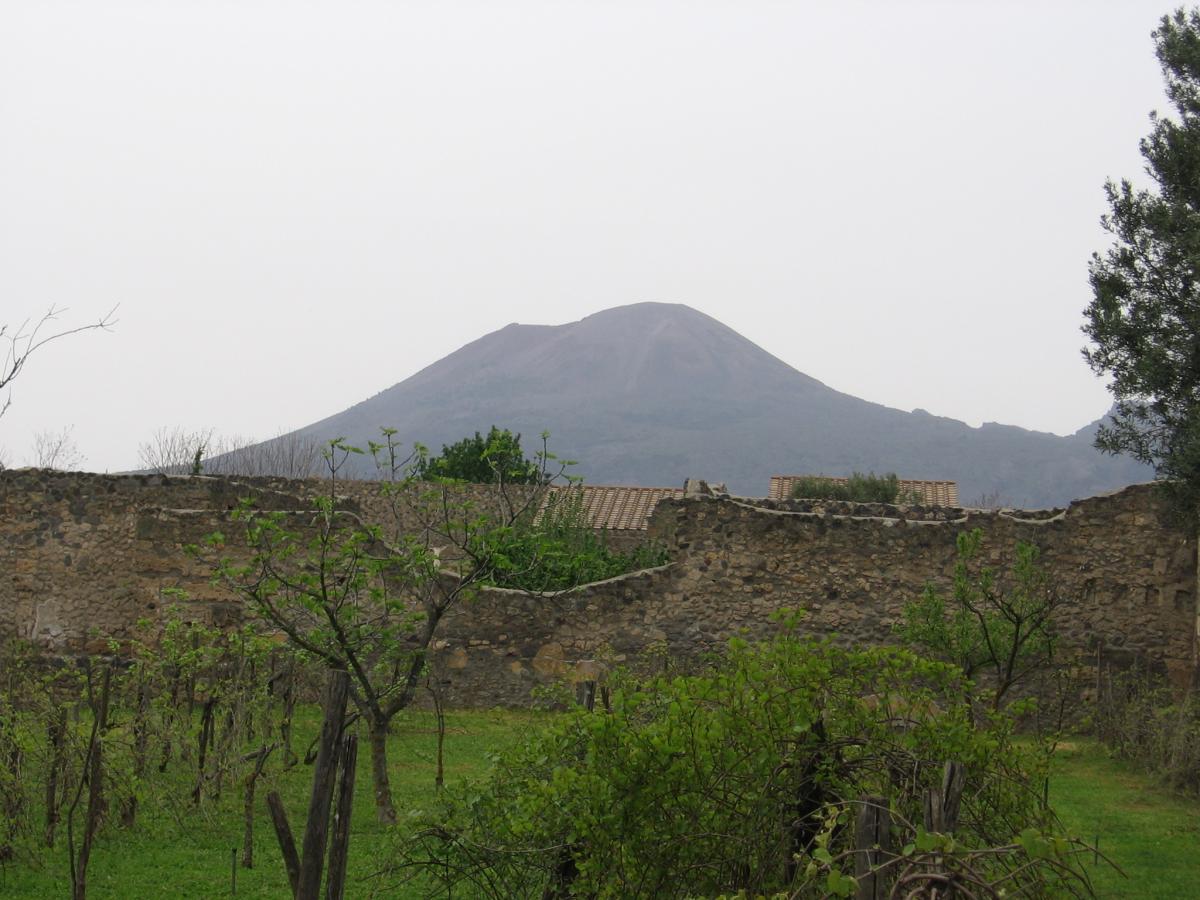 It was while exploring these that I finally lost track of my people. I could have sworn that they had gone further down the street we were exploring, so I hurried after them. It took some time for me to realize that the tour had, in fact, ended, and that they were all headed back the other way. But what other way? I found where I was on the map, but it didn't indicate which part of the maze actually led back to the hotel. I asked the people around me. They were Italian - or German - or Czech - or something. Non capisco! I glanced at my watch. About five minutes to the scheduled departure time. My jacket (the day was warm) and my book (didn't think I'd have time to read) were on the bus. I could find another way back to Rome, no doubt, but I had a train to catch for Florence in the morning. The tour company had a schedule to keep. My fellow tourists had other deadlines to meet. I really didn't think they would wait. So at some point, I started to run. I picked a direction and ran. And - long story shorter than it could be - of course, I made it. And of course they were there. But during my flight I had, at one point, glanced back over my shoulder, and what should I see there? Vesuvius. Huge and dark outlined against the sky. And although I was fairly certain I wouldn't become an ash heap of my former self, I sorta felt I had experienced something of the real Pompeii.