Something else we do in Seattle on rainy days.

Gary’s Games and Hobbies is included here both because it was in the phone book under “Bookstores” and because I’d always wanted to go there anyway. When I was there sometime around the turn of the century, one front window had model cars and motorcycles. The other had games: , Twisted Golf, Dairy Monopoly, , Mastermind.

Many of today’s games require action figures – action figures which are placed on a table built up with the game scene, like a 3-D puzzle – cardboard castles, redoubts, “cover” (trees, bushes and the like). One such game was in progress in the store. It’s called Necromunda and it requires set pieces, action figures, and catalogs full of game information. You play it with sets of cards determining the action, and a pair of dice. 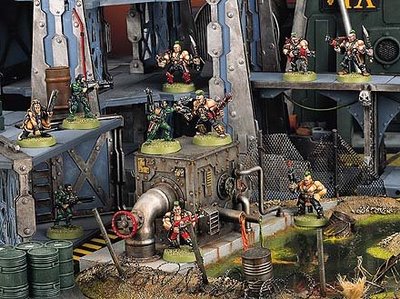 Anyone familiar with Magic, The Gathering will be familiar with the style of play, but this game has a fantasy you can build as well as imagine. One guy walked around the table with a measuring tape, trying to determine the length of shot he needed to make to hit his opponent. By the way, you wasted that ‘out of ammo‘. You should have waited until I made the ammo check. The bitch is going to middle assault your sniper there. Her leadership is 10. What is it? A mental duel? Mental assault. These guys are totally into it. One is looking up stats and the minute instructions that accompany each card and roll of the dice in a book the size of a Sears catalog. They don’t even know I’m there.

Behind the players are shelves with more board games, a series called “Bookcase Games”: “The Republic of Rome – Game of Political Intrigue in the Ancient World, 204-43 B.C, 1630 Something, War and Peace (a game of the Napoleonic wars).

And yes, there are books. Books on games, e.g., the Werewolf series: The Wild West, The Apocalypse, White Wolf. Fantasy novellas based on games like Magic the Gathering. There are tarot cards and bridge decks, along with scorecards and paraphernalia. The door to the right leads into another game room with large tables set up in the rear. Here are shelves of jigsaw puzzles and model building kits. A poster announces a car-modeling contest. No, it’s not a bookstore. But if you want games or books about games or books based on games, Gary’s Games is the place. You should Like it on Facebook.