I went to England for the first time on a school trip in 1979, accompanied by two of my favorite professors. I was a bit older than the average student at the time, and had the privilege of hanging out with the professorial babysitters from time to time. One of my favorite excursions with them was the hunt for Jeremy Bentham.

It was rumored, so the professors claimed, that JB had left a proviso in his will, outlined in the Wiki entry, that his body be left somehow enshrined in a glass case and carted around to meetings from time to time. The profs weren't sure where to find him, but in the end I think we did. At any rate, there was a figure of a man seated in a glass case down a dark, dusty corridor in I forget what building. He was headless, but the profs seemed to think that his head had been placed on the floor between his feet. I was the one designated to get down on said floor and look, but the inside of the cabinet was very dark and I could make nothing out in the gloom shrouded by the figure's black trousers and shoes. There was no plaque that I recall. We left a little downhearted.

Fast forward to August of 2005. London is only the first stop on my itinerary of a journey through England. Technology has advanced to computers and Google, which has provided me with Jeremy Bentham's 21st Century address. The University of London. Right down the street from my lodgings. This version has a head, which has been crafted and put into place. He has his own anteroom, of sorts - a wide section of a hallway leading further into the halls of learning. I took a (bad) picture. I wonder if he approves the hat. 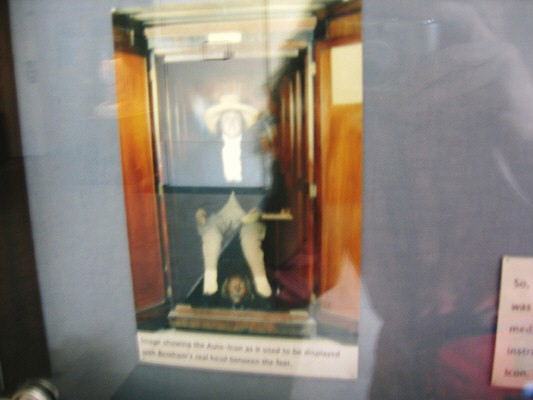 I wonder if he would think the pub across the way, the Jeremy Bentham, lived within the parameters of his felicific calculus: 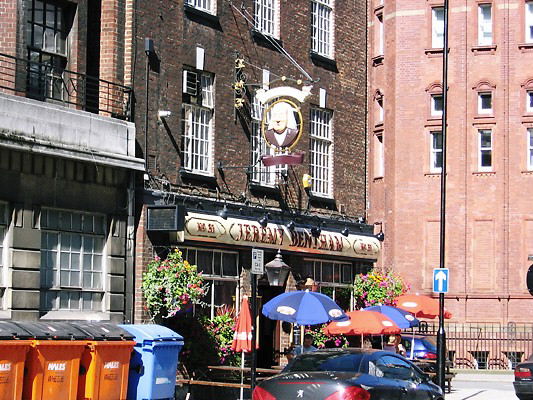 I went there often of an evening for supper and a pint.