Nothing had prepared me for the day in 1996, sometime after Jerry Garcia died, when Richard told me that Robert Hunter, the lyricist for the Grateful Dead, was coming to town and asked would I like to join The Crew? 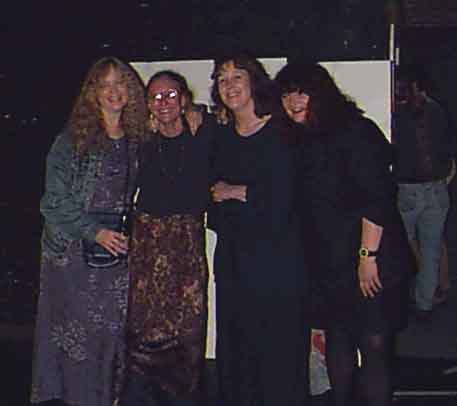 The Crew: Caroline, Joan, Margo and Brion - had already been together for a few years before I came on board. The women always prepared the backstage area, complete with snacks and drinks. Brion picked up “the talent” from the airport and drove him around at his request. I barely knew Richard, the brains behind a little production company called Crabby Goat, before he asked if I would be interested in helping promote a concert by the Tibetan Gyuto Monks at the 5th Avenue Theatre downtown. My “help” consisted in posting flyers around the north end of Seattle. Richard was so certain the entire thing was a failure that I was prepared to be as positive as possible, but as the theatre slowly but surely filled up that night I was also told by others in The Crew that Richard was always convinced the entire thing would be a failure, right up until curtain time. I guess it’s a promoter thing.

So when he asked if I wanted to be in the Hunter Crew, I assumed he meant I would once again be plastering flyers all over North Seattle. Instead, he wanted me to dress the stage. He wanted me, who had not a designer bone in my skinny body, to create a space in which Hunter would sing and play. It had, he told me, to contain a rug, a chair, and a side table. Anything else was up to me.

Luckily the other women of The Crew came to my rescue. Caroline (I think) had an old Persian carpet, of the kind the Dead used on their stage. Someone else had a comfortable chair with a side table. So that was that. I was set. But no.

When we placed all of the requested items on the stage, this time at the Moore Theatre, it looked shabby. All it needed was a bare lightbulb hanging from the ceiling to look like a cold water flat. I wanted something else.

I was online with other local Deadheads at the time – had gone looking for them after Jerry died – so I put out a plea for help. One of them whose name I have long forgotten but who was the shining heroine of this piece, told me that she worked in a gallery and that there was a painting there that she thought would be just the thing. So off I went to take a look at it.

It was just the thing. It was a golden marsh of sparkling reeds and sun on water with a buttery haze of sky. It wouldn’t distract from Hunter. It would be more like the view out of the window from his comfortable seat on the hearthrug. It was about 4x8 feet and the price tag read $10,000. The artist said that he would be honored for it to be used for the occasion, but the owner of the gallery told me that he could not let it out of the shop unless I signed a promissory note in which I agreed to pay the gallery 10 grand if it were damaged or stolen. Don’t ask me how or why I signed the thing. I knew I could find the money if I had to. Also don’t ask. But I signed and, even crazier, called my friend Brandon, the only one I knew with a van, to pick it up and bring it to the theatre.

Then I went back to arrange a tripod of sorts – don’t remember how we did that – and await the arrival of both Hunter and the painting. I was not at all hopeful. Especially when someone yelled that Brandon was here and I went out onto the loading dock to see Brandon and one of his favorite running buddies, Lloyd, almost certainly drunk, hanging out of the van and yelling my name.

But I shepherded them all up into the theatre and onto the stage, where we got the painting suitably arranged. Just a few more hours until showtime. I remember going up into one of the box seats and looking everything over while Hunter was doing a sound check. That’s when I almost cried at the thought that after all these years I was finally an integral part of a Dead show of sorts. The lyricist himself was playing down there on Caroline’s rug in front of the painting that I had made possible, practically lighting up the stage with its golden glow. Then we all went out to dinner.

The show when on as scheduled. I barely remember it. All I could think of now was getting the marvelous painting back to the gallery in the same shape in which it was taken away. Actually, there was a high point when, at the intermission, someone in the crowd remarked on it, saying that the set was unusually beautiful tonight, and their companion said, yes. That painting is brilliant. Right then and there I decided that if I had to lose 10 grand, it would all have been worth it. Even if Hunter never seemed to notice it. Which he didn’t. However, huge success all around. Richard even made book. Maybe even a profit.

After the show, I think we all went to the Moon. Or maybe there was a second show the next night? So much of that time is just a blur to me now. When it came to returning the painting, Brandon and Lloyd were not to be found. The theatre manager would be there for a few hours during the day, and that’s the only time he could let me in to get the painting. I had no idea of how I was going to transport it. I didn’t have a car. Nobody had cell phones. Somebody, probably Caroline, gave me a ride to the theatre along with a big quilt in which we wrapped the painting and brought it out to the loading dock. It was pouring down rain. Then she left me there with a book I was reading – a jaunty little adventure called Neanderthal – while she went off to rent a truck. After an interminable wait, she finally reappeared in her car. It was the first of the month, she told me. Everybody who was moving had rented all the trucks. But don’t worry. Brion is looking in Bellevue. And off she went, leaving me with my book and a $10,000 painting wrapped up in a ratty old quilt on an ancient loading dock while garbage workers came and went unloading some construction dumpsters. I couldn’t help noticing how much they all resembled Neanderthals.

The afternoon crawled on, while scientists prowled about the newly discovered community of ancient humanoids hidden away in the mountains of central Asia, I died of thirst, and was fantasizing about peeing off the edge of the loading dock, when finally Brion came peeling down the alley in a moving truck. Together we loaded the painting safely into the back of the truck. I insisted on riding with it, holding on to it so it could not be jarred against the walls. It was pitch dark in there after Brion pulled down the door, but the gallery was just a few blocks away and we made it. The painting completely unscathed. My 10 grand saved. And my place in The Crew apparently secured.

Over the next few years there were a scattering of other shows that brought The Crew together, but I will always remember and cherish their adoption of me in that sorrowful year after Jerry died. Caroline left us too soon, and then Hunter himself. But Margo and Joan and Brion carry on doing good works wherever and whenever they are able. I had to leave Seattle for Madison, and I guess my part is to remember and record. The way we were. 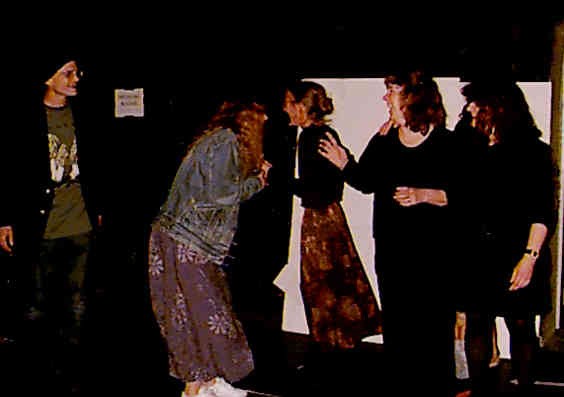