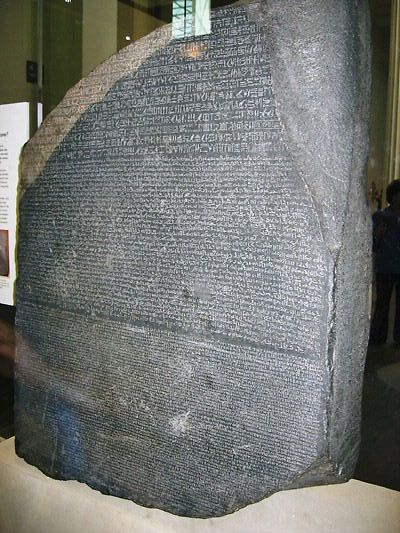 I had forgotten the Rosetta Stone was in the British Museum, but I had barely glanced around when I saw it, in a case, just inside an interior doorway to my left. When I came back five years later, it was in the same place, but so crowded round with other worshippers that I couldn't get near it. But that day I practically had it all to myself and it was only when others began to gather at the shrine that I left it to wander deeper into the museum.

But the Rosetta Stone. There was something about the thing. Just a glass case between my hands and the hands of someone who had carved these hieroglyphs, these scripts, these Greek letters, over 2,000 years ago. Yes. I've seen many, many artifacts from ancient history in my time - I used to work in the Field Museum of Natural History. Used to have long conversations with a couple of mummies there. But for some reason this stone seemed so much more real. Perhaps because it reaches across time the way that it does. It tells of ancient Egypt in the Hellenistic Age, after conquest by Alexander and the installation of the Ptolemies as pharoahs. The person who carved these hieroglyphs, these letters, these symbols in three different modes, hieroglyphs, demotic script, and Greek, had no way of knowing that it would be the Greek that would survive in a form that people centuries later could access. We don't know his name - I am assuming gender. But the work of his hands has survived the ages so far, and it is because of this that we can read the histories of a far more ancient Egypt today.

In the reign of the young one—who has received the royalty from his father—lord of crowns, glorious, who has established Egypt, and is pious towards the gods, superior to his foes, who has restored the civilized life of men, lord of the Thirty Years' Feasts, even as Hephaistos the Great; a king, like the Sun, the great king of the upper and lower regions; offspring of the Gods Philopatores, one whom Hephaistos has approved, to whom the Sun has given the victory, the living image of Zeus, son of the Sun, Ptolemy living-for ever beloved of Ptah; in the ninth year, when Aëtus, son of Aëtus, was priest of Alexander

Zeus and Ptah in the same sentence, it reads like an ecumenical text of the ancient world.